And oh what dream car the Fageol turned out to be, it was to be available on 135″ and 145″ w.b. chassis and it carried a 824.67 c.i., six-cylinder sohc Hall-Scott aviation-type power plant. The engine only weighed in at 565 lbs. and was guaranteed to produce 125 h.p. at 1300 rpm, which gave it one horse-power for every 4.5 lbs. of engine weight, a very high figure at the time. It also featured a dual barreled Zenith carburetor. All of this was backed up by a smooth Hele-Shaw multiple-disc clutch, followed by a unique bronze and aluminum cased three-speed transmission.

The photo (below) shows us the heart of the Fageol and the engines shown, were being made during 1917, in a corner of the famous Hall-Scott Motor Company plant in Oakland, CA. They were slated for use in the new Fageol car, until the U.S. government demanded the use of the entire output of the plant, as it had planned to build thirty thousand airplanes for use in the war. The car was slated to be one of the biggest and most impressive cars made at the time. The company that was formed to build them, was headed by Frank R. and William B. Fageol, along with Louis H. Bill, in Oakland, CA. during 1916. It is believed that only three cars were ever completed and the first two were used across the county at automobile shows to promote the new venture.

The public and the press expressed great excitement about the car, which was listed to sell in chassis form for $9500 and with the higher priced custom bodies, it pushed the total to a very expensive $12,000. Some of the finest details known at the time were used on the car, which included ivory for the door handles, hand and spark levers on the steering column and the hood latches.

Other distinctive features were, the six angled ventilators on the hood that were equipped so that they could be blocked off and made waterproof from the underside. A 12 volt starting and lighting system with a full complement of lamps was included, with two for under the hood use. 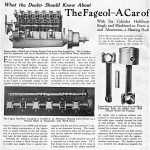 The two articles (just above on the left and right) are from the Feb. 15, 1917, issue of The Horseless Age and give many details of the unique mechanical construction of the power plant and transmission. In the center is a plate from the Fageol catalog showing a cross-sectional view of the sohc six-cylinder engine.

Just above is an interesting plan view of the chassis showing the layout of all of its components. Three things to note are; the sloped radiator, which gave the car an interesting look at a time when most others were vertical, the large transmission equipped with a rear-mounted brake and a very-beefy rear axle assembly.

Just (above) is a photo that shows one of the first two cars produced. Another poor photo exists of a touring car that appears not to be equipped with a top assembly. Note the very distinctive and rakish look of the slanted radiator and the hood vents. Six plates are seen (below) showing proposed custom bodies. .
After the war Colonel Hall went off to produce the DeVaux and the Fageol brothers turned their attention to the production of Fageol trucks. That company was a success for a time and built some very innovative trucks and buses, that we will cover later. If any of our readers have any more information or photos  of the Fageol car or trucks and buses please let us know. Thanks to David Traver Adolphus for his help.